It’s well known to those who know it well that I’m quite partial to the odd glass of wine now and again so when the opportunity to sample some of Australia’s finest in good company came along it was a bit of a no-brainer.

The pickup was city centre so only a short walk from our hostel. I decided to tidy myself up for such an occasion so had a local barber take my hair and beard back to something neater than the homeless bum look I seem to favour these days. Rob had wisely booked us in for a half day tour which was far more conservative & pragmatic than I’d have been which is all the more reason why I’m better to take a back seat when it comes to organising anything involving alcohol.

Over the course of the day we visited 3 vineyards, a brewery and a chocolate factory. I could tell you about each and every wine we’d tasted but I’d be stealing all this information from the ever magnificent blog.robkershaw.com so I’ll let you wander over there for any extra details should you want them.

For the most part I enjoyed the white wines, preferred the reds, was fine with the roses and was pleasantly surprised by the port – especially the second swig after crunching through a chocolate covered coffee bean.

The first stop was the Houghton winery where we tried 3 whites and a couple of reds, all of which were nice but not jaw-dropping. Jarah Ridge was our second stop and my favourite winery of the day, not least because we got 10 different tipples to try. The overall standard was high – for my tastes anyway – and the port was inspired.

We were also snapped by a pro photographer only to find out later that they wanted to use the obviously stunning image of the four of us to market the tours. We agreed and can now say we’ve made it in the modelling business – you know this when you’re reached the heady heights of the fridge magnet. 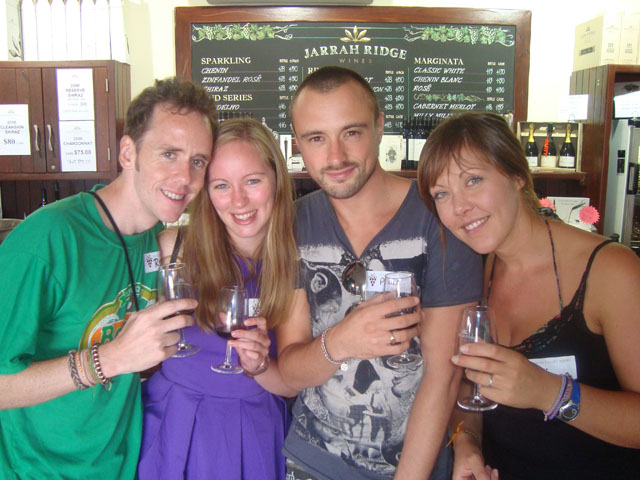 Coming to a fridge near you…

The final winery was Charlie’s Estate and their wines didn’t really work for me. Not to worry – the stop after was the Mash brewery for beer & nibbles. This was a nice change and both myself and another chap in the tour managed to squeeze in another pint before we moved on to the underwhelming chocolate factory.

We were dropped back in the centre of Perth where we had a rendezvous to keep with an old friend from Japan. We’d last crossed paths in Tokyo at an all-you-can-drink party & all night karaoke session so it was a great pleasure to reconnect with the legendary Liam.

We tracked him down at his work and then took a wander up to a cool bar that served its beers in brown paper bags. I think it’s part gimmick and part practical workaround for patrons to sit in the alley alongside and take in the wild street art. Rob & Gilly were starting to wilt after the hard days drinking and had an evening meal planned with their hosts so said their goodbyes while the three of us took a wander for food. Liam had eyes on introducing us to some high quality burgers and we were duly impressed.

For our final treat of the evening we were taken to a favourite local haunt to smoke shisha for a while. It was interesting to try and I’m glad we went as the Egyptian venue was a cool place to hangout but shisha’s not my thing. We said our goodbyes and hit the sack.

We packed up the next morning and Rob & Gilly were kind enough to borrow Rob & Fi’s car, pick us up and drop us at the airport for our flight to Alice Springs.